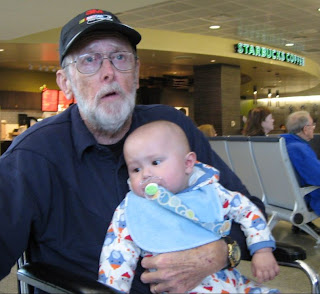 We had a wonderful Christmas with our son, his wife, and our newest grandson, Noah. It would have been even more special if our daughter and her family could have been with us too. They came last year from Oklahoma and were not able to come this year. We don't do Christmas with lots of shopping and gifts. Our Christmas is based around family and fun and the real meaning of Christmas.
This is meeting our grandson for the first time at the airport. His PawPaw had been talking to and seeing him via I-Pad2 and saying "buden, buden"?. As soon as they saw each other, PawPaw said "buden, buden" to Noah and he came right to him. PawPaw put him on his lap and they rolled around the airport having fun while our son got luggage ready to go. This child had come on the re-eye flight from San Francisco. 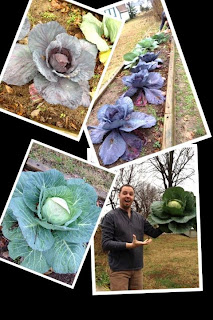 This is Noah sitting in the big cabbage leaves. We had planned to just have him in his diaper sitting in the middle of it but the leaves flopped before we had a chance to take the pictures. Well, we can call him a cabbage patch kid anyway! 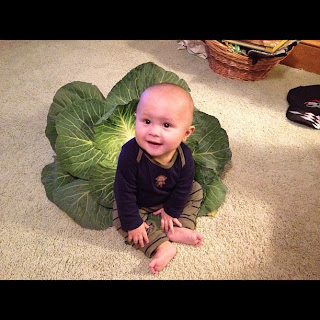 Our son has a friend whose dad collects and restores peddle cars, trikes, tractors, etc. This is a 1948 Pontiac that he would let Noah touch. Ha! 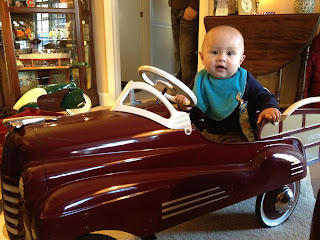 On Thursday, before they left on Friday, we went to the mall. 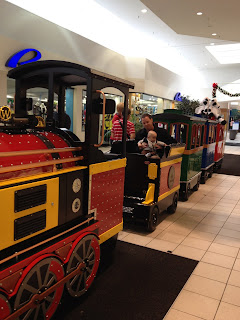 This is a tradition in our family--we go to see the sights and sounds and eat at Chick-Fil-A. These are pictures taken with Noah and his dad riding the Christmas train in the mall. I think dad and son enjoyed it! 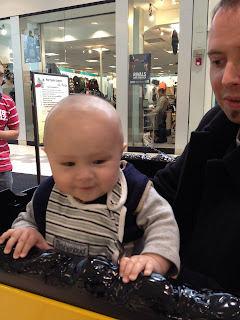 Our son and his wife did surprise us with a special gift. After Noah was born, I asked if they had a Sears near by that they could take him to and have a picture made like the one I had made of his dad. I had not thought any more about it. Noah was born on June 16 and his dad was born on June 28 and the pictures are at the same age. 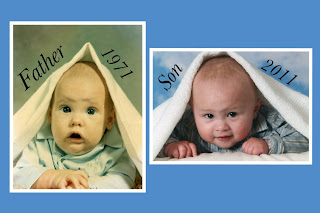 I hope you have enjoyed a glimpse of our time together. I hope yours was as wonderful as ours. I wish you the best for the New Year.
Love,
Marie
♥ from the heart of Marie at 2:29 PM 6 comments: